The Reason Why (Gospel Tract)

Dr. Billy Graham calls Mr. Laidlaw “… one of the world’s great Christian laymen,” and The Reason Why has been called “… that remarkable little book” by Dr. E. M. Blaiklock, eminent classicist and Christian scholar from Mr. Laidlaw’s native New Zealand.

In his introduction to The Story of The Reason Why, Dr. Blaiklock calls the phenomenal success of The Reason Why (over sixteen million copies in print in more than thirty languages) “… one of the most amazing ventures in Christian publishing in this century.”

The late Mr. Robert A. Laidlaw, C.B.E., was a Christian businessman from Auckland, New Zealand. He was the founder of the Farmer’s Trading Co., Ltd., and widely recognized as one of New Zealand’s most successful and respected businessmen.

At the age of 23 he opened a mail order business in Auckland, which grew spectacularly into a retail organization today employing a staff of 2700 men and women.

It was Mr. Laidlaw’s concern for his staff members which originally prompted the writing of The Reason Why, as a testimony to his Christian faith. 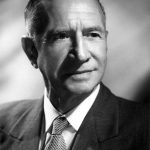 Robert Alexander Crookston Laidlaw CBE (8 September 1885 – 12 March 1971) was a New Zealand business man who founded the Farmers Trading Company, one of the largest department store chains in New Zealand. He was also a Christian writer and philanthropist and a well-known lay preacher in the Open Brethren movement.