John MacArthur: Servant of the Word and Flock

Through more than forty years, John MacArthur has opened and taught the Word of God in one local congregation, Grace Community Church, Los Angeles. Consequences have followed which no one anticipated, and which the preacher attributes to the sovereign hand of God. A people united to Christ, and to their pastor, became a channel for blessing across the earth.

It has been a ministry marked by characteristics that re-appear in every spiritual advance – not concern for relevance not special attractions for young or old, male or female; but love for God and dependence on his Word and promises. MacArthur has proved, without ever intending to do so, that true preaching of the Word of God is international, because if you teach the Bible it transcends every border, every language, every culture.

It is as relevant today, and will be tomorrow, as in all the years since God put it down. That is why his sermons are heard or read in more than two hundred countries around the world today.

But this is also a human story, including the shaping of his youth, the strength of marriage and family, the refining influence of trials and controversies, and the building of a man whose staff have never known to be angry. There are friends who, for all their love of his ministry, say his life is his best sermon. 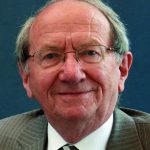 Iain Hamish Murray, born in Lancashire, England, in 1931, was educated at Wallasey Grammar School and King William’s College in the Isle of Man (1945-49). He was converted in 1949 through the ministry at Hildenborough Hall, Tom and Jean Rees’ Christian conference centre in Kent. It was at Hildenborough later that same year that he first met Jean Ann Walters, who was to become his wife (they married in Edgeware on April 23, 1955).

After service with the Cameronians in Singapore and Malaya, he read Philosophy and History at the University of Durham with a view to the ministry of the English Presbyterian Church (his parents’ denomination). It was at Durham that he began to read the Puritans, whose writings were to become a lifelong passion. After a year of private study, he assisted Sidney Norton at St John’s Free Church, Oxford, in 1955–56, and it was here that The Banner of Truth magazine was launched, with Murray as its first editor.

From 1956 he was for three years assistant to Dr Lloyd-Jones at Westminster Chapel and there, with the late Jack Cullum, founded the Banner of Truth Trust in 1957. He left Westminster in 1961 for a nine-year pastorate at Grove Chapel, Camberwell. With the world-wide expansion of the Trust, Iain Murray became engaged full-time in its ministry from 1969 until 1981 when he responded to a call from St Giles Presbyterian Church, Sydney, Australia. Now based again in the UK, he and Jean live in Edinburgh. He has written many titles published by the Trust, in whose work he remains active. He is still writing.

Be the first to review “John MacArthur: Servant of the Word and Flock” Cancel reply

Twelve Unlikely Heroes: How God Commissioned Unexpected People in the Bible and What He Wants to Do with You

How to Study Your Bible (Kannada)

In the Footsteps of Faith